Posted on October 25, 2017 Categories: Uncategorized No comments yet

Over the past few weeks members of the Cherokee Hiking Club have performed maintenance on their adopted section of the John Muir/Benton McKaye Trail system.  This section is from Childer’s Creek Trailhead just up river from Reliance, Tennessee to Big Bend parking area, a distance of three miles. 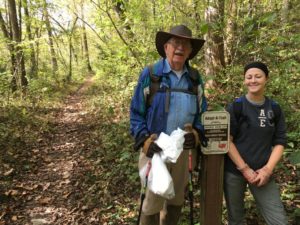 Members, led by Clayton Pannell and including Otis Pannell and Sue and John Robinson, removed numerous downed trees from the trail. Several days later Clayton led another group including Jack Callahan and Megan Callahan, who brushed out necessary sections of the trail and removed downed limbs. The club has several work trips each year to insure the trail is clear of obstacles.

This three mile section of the trail is an easy, well graded trail with the exception of about 100 yards near the middle which involves several rock steps and a short pitch grade.   It is a great section for new comers who are interested in hiking to get a feel for the sport.  It is used by fishermen to access the Hiwassee river, as it follows the river closely for its entire length. In spring, there are numerous large patches of flox, trillium, columbine, and wild azalea in bloom.  By utilizing two vehicles, leaving a shuttle vehicle at one of the trailheads, the entire section can be easily walked in less than three hours. 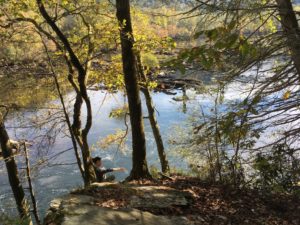